I like to imagine that Spun is an exhibition made in Piero Manzoni’s world. Not just an exhibition created in the spirit of the mischievous avant-garde artist, but quite literally, that Spun lives in the world that sits on the pedestal in Herning, Denmark. That is where the Italian artist cleverly, magically, converted our spherical planet into a life-size sculpture and placed it on an iron plinth. Imagine a three-foot cube with the title of the piece, Base of the World, Magic Base No. 3 by Piero Manzoni—1961—Homage to Galileo printed in relief and upside-down on one side of the geometry. It is a great piece of twentieth-century conceptual artmaking and an iconic antecedent to Kevin Maginnis’ Spun.

Spun’s ancestry, as is the case with most impacting conceptual art, must also weave through Duchamp’s critically reflexive Modernism. Because Duchamp’s found objects marked the translation from a production-oriented culture to a selection-oriented culture, exhibition, display, and circulation become relevant fields of critical and enterprising artmaking. Duchamp made play of these post-production arrangements, inventing exhibition schemes to hang work alphabetically or according to chance operations. As president of the “Hanging Committee” for the inaugural exhibition of the Society of Independent Artists in 1917, he deployed contrivances as a means to reconsider traditional presentation strategies while at the same time eschewing the authority of the auratic art object.

Spun’s upending of individual artworks also stands, albeit upside-down, in a laudable linage of gravity disruptors. Since 1969, Georg Baselitz has embraced a long relationship with the act of inverting gestural imagery. Perennially evoking the lamented cross of St. Peter, Baselitz paints and hangs his Neo-Expressionist compositions upside-down. Rodney Graham’s images of majestic Welsh oak trees are photographed with a large format camera and hung upside-down to replicate the inverted image in the camera’s viewfinder. Martin Kersel’s Tumble Room, rotating at four revolutions per minute, subjected a to-scale simulation of a little girl’s bedroom to violent centrifugal force. And then there is Julian Hoeber’s participatory sculpture Demon Hill, an architectural trick that creates the illusion of a gravitational mystery spot. Each of these artists, through illusion or physical manipulation, use the forces of gravity as an optional condition to reality.

Kevin Maginnis employs illusion. Obsessively accurate and meticulously detailed, Maginnis’ ability to create an unsettling verisimilitude of an upside-down art gallery complete with a bountiful selection of artworks installed according to the gallery’s inverted orientation is a feat of craft and critique. The pleasure of pretend is powerful in Spun. Uncanny resemblance coupled with spatial disorientation induces a visual dizziness in the viewer. But Spun’s pointed critique is equally acute on the intellect. It is not difficult to make the critical analogy to the turning over and emptying of a piggybank or a pocket being pulled out of a pair of pants and its content spilling onto the floor. Traditional value systems, including the influence of the market, drains from this conceptual enterprise as effortlessly as water pouring from a glass.

In addition, there is a denial, a conceptual obstruction that abstracts our knowledge and interpretation of each art object included in the exhibition. The twenty-three artworks, each casting shadows along their upper edges, do not exist in the physical world of the viewer but in an alternative world where criteria and judgment also hang in suspension. John Riepenhoff’s Handler (2015), a pair of realistic legs emerging from behind a toner transfer painting depicting a set of glossy lips by artist Nolan Simon, is an indelible to-scale body that inhabits Spun’s alternative reality. Viewers encounter the Handler hanging upside-down from the ceiling, but in Maginnis’ illusion the figure is firmly standing on the ground. Riepenhoff’s sculpture and its false appearance runs parallel to Maginnis’ project, ensnaring the viewer with the pleasure of trompe l’oeil and the subterfuge of cultural critique. Erik Beehn’s floral wallpaper and its challenges to painting’s usual power dynamics are enhanced and complicated within Spun’s and further deny the viewer any conventional understanding of beauty, vulgarity, originality, and expression.

The veracity of history comes into play when you consider Maginnis’ insertion of an ancient Columbian artifact from the Magdalena Valley into his project. Similar in expository tone to Fred Wilson’s museum interventions, installing a ceramic fragment upside-down risks further damage to the artifact while also suggesting a precarious relationship to authenticity and historical records. Assaf Evron’s Untitled (Athens and Oraibi) (2015) also juxtaposes historical authorities and cultural motifs. Not mash-ups, but crisp, formal, and intellectual comparisons, Evron’s images installed upside-down are easily converted into the poetic as his cultural propositions become oblique and his design vocabulary more seductive.

B. Wurtz’s Red Bowl (1988) and Brad Killam’s Madison, ME #14 (2015) combine genre and a graphic visual language that is so commonly understood within the discourse of painting that a sunset or a coffee cup maintains its knowability, even hanging upside-down. This speaks to the staying power of genres and its recognizable taxonomies. Other representational paintings included in the exhibition pull their reorientation into their narrative. The upending of Tommy Mishima, David Derish, and Julia Haw’s pictures complicate the viewer’s understanding of the subject and the logic of the painting’s picture space. Roland Miller’s Jumping Jack No. 7 (2016), on the other hand, solicits viewer empathy when hung head-down, humanizing the clichéd image of a white male bodybuilder.

Abstraction has a tendency to behave indifferently when exposed to Maginnis’ up-down hierarchy. For example, Tony Tasset’s Domestic Abstraction (1988) is as ironic and cool with materiality as it is toward its physical alignment as interior decoration. However the symmetry at work in Matt Morris, Sabina Ott, and Lise Haller Baggesen’s abstractions underscore a more generous relationship to spatial orientation. These works are imbued with the fluidity of change and adaptation. Up-down is not a compelling source of authority for these artists; power instead is located in a multiplicity of alignment.

This is not the case with Nicholas Frank’s Greatest Skips (Inverted) (2016) where his upside-down turntable pathetically fails. Because of gravity’s pull, the record player’s arm hangs below the rotating record, cruelly denying the stylus its groove. It’s A Bird…It’s A Plane…It’s…Who Cares……(2016) also examines the futile humor in working against gravity. CD Wu’s graphite wall drawing depicting an upside-down cartoon duck walking on a tube of purple neon light is a representation of a breakdown. It is not only a duck out of water, it is a duck walking on its head. At the same time Rodrigo Lara Zendejas’s Saint De Kooning (2016), cast in the purple glow of Wu’s neon, maintains its rigorous assemblage of iconic objects and hangs in the viewer’s face with its intellectual pun intact.

Artists JS Wagner, Shaina Lund, Nelly Agassi, and Banrei’s videos and sound works do not succumb to the disruptions of inversion in the same way as their object counterparts. Vito Acconci extols sounds as being the greatest public art simply because sound waves cannot be restrained. Nor can particles of light for that matter. The immaterial form of these artists’ works denotes a freedom that no other contributor to Maginnis’ exhibition can boast. Yet in the context of Spun and its conceit of the upside-down, each work of art was forced to take on additional content. Most often this content manifested as reflexive criticality, but at other times the pull of gravity evoked a range of auxiliary emotional material. And then there is the whole of Spun; an exhibition, a theater, a sculpture, a conceptual enterprise, a gallery, and a slight of hand. “Spun” is also the past tense of “spin”, which in political vernacular is akin to a lie. But like Manzoni’s lie in Herning, Denmark, Spun is an illusion that forces us to reconsider the real.

Review of Samantha Fickel's "Touch Screen" in Her Environment #7: Murmurs and Palpitat 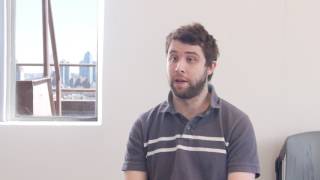